We ended session 3 with the boys huddled in the chamber beneath the statue of Sergin Malandrus getting to know their new toys.  They had found a set of valuable figurines, a set of armor, a Bag of Tricks and two +1 weapons.   They had pulled a bear out of the Bag of Tricks and then tried to get some rest.  Unfortunately, they had already wasted most of the night retrieving their treasures “and learning what they did.  Plus, they were sharing the space with a quixotic faerie dragon and a restless bear.  Not to mention, the eerie voices continued to chant, “243.243, 243, 243” all around them.

As a result, despite being in a relatively savfe place, they went another night without a restful sleep and, when Jivew awakend them in the morning, they were even more weary than the previous day.1  Nevertheless,  they roused themselves with the promise from the faerie dragon that they would reach the inn before nightfall. 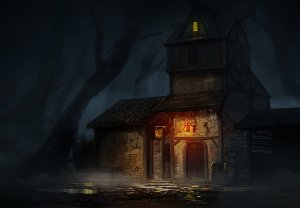 And so they did.  The sun was still visible above the trees when they broke through the underbrush onto the North road from Haven Cross.  Just South of them they could see the smoke rising from the chimney at Jolly Momo’s Inn.  Gratefully, they turned to thank Jivew, but he had disappeared.  They heard his giggling in the distance.  The bear had wandered off into the woods sometime during their trek from the statue.  The two adventurers shrugged and shambled the final distance to the inn where they were warmly greeted, given rooms and baths, and fed.  When prompted  they shared  the tale of their walk in the woods with Momo, leaving out any mention of the statue or the treasure.

The next morning, clean, rested and refreshed, they returned to Haven Cross.  It was evening when they reached the town; so, they took rooms in the Drunken Horse Inn and enjoyed another amazing dinner from the inn’s orcish proprietress.  The next morning they went to the tower to turn in the box they had been sent to retrieve from the alchemist.

When they turned in the box the clerk made a notation in a ledger then told them to wait.  He went to the back of the room and had a brief conversation with an older gentleman who stood and came over to the heroes.  He was tall, though stooped, and walked with the assistance of a cane.  “So! You are back! It took much longer than usual, we were getting worried that something might have happened to you!”

He introduced himself as “William, some folk around here call me Wise, others Old Bill.”  He asked the adventurers to join him out back and tell him their tale.  They were seated in a gazebo behind the tower and given refreshing drinks.  Old Bill listened to their story and asked questions along the way.  While they spoke a quill pen wrote their words on parchment seemingly of its own accord.

When they were finished he nodded approvingly.  “That dragon has been flitting around here for a while now.  He’s mostly harmless.  I had no idea those ruins held anything so interesting.  I may have to commission a guild team to investigate it.”  He thanked and congratulated them on their first successful mission.   Then he handed them small metal tokens with the guild crest stamped on them.  “You are now officially adventurers.  These tokens give you access to the ground floor of the guild hall where we have tents you can sleep in and a kitchen. The foods not quite as good as the Horse, but its not as expensive either. These also entitle you to request more missions. Good luck.”  He also gave them each a vial containing a sparkling red fluid. (healing potions)

The  pair thanked Old Bill and wasted no time seeking their next assignment.  They approached the desk in the tower and announced themselves.  The clerk consulted the ledger, went through the files, and returned with a slip of parchment.  “There’s a dwarf fella named,” he consulted the slip, “Gundren Rockseeker.  Him and a gentleman named Sildar Hallwinter, need a wagon loaded with mining equipment delivered to,” he looked at the slip again.”Barthen’s Provisions in Phandalin.  Bounty of ten gold payable on receipt.  Do you accept this quest?”  They did (of course), and were told that the wagon would be waiting for them the next morning at the stables.2  With the rest of the day to themselves they visited the guild hall to claim tents for the night and put in some time at the training grounds.

We ended the session by handing out Experience Points and bringing them up to 2nd Level.  This gave Tenzen access to ki, and the Flurry of Blows, Patient Defense, and Step of the Wind features. He also gained an additional 10ft of movement.  Falconsight gained the Archery fighting style and the ability to cast spells.  He picked Speak with Animals and Detect Poison and Disease as his two 1st Level spells.

Join us next time when we learn what happened on the road to Phandalin.